DIYSampleTesting.com
Collect and Submit Your Own Samples and Save!
Sample testing services offered by
a fully accredited laboratory

Heavy Metals Testing
Non- destructive testing can be performed on submitted samples.
Have an antique item, paint chip, stone or other sample and wonder what metals might be in it?
Have something made of cork and wonder if it contains lead or other heavy metals?
Wondering if wood in your backyard is preserved with arsenic?
Want to screen a sample of garden soil for major contaminants?
Are you a metal detector enthusiast or relic hunter who has found something interesting?
Quantitative and Semi-Quantitative Metals Testing
Barium
Iron
Lead
Titanium
Zinc
Quantitative or semi-quantitative testing can be performed for the following metals:
Qualitative Metals Testing
Qualitative metals testing (present or absent) can be performed for the following metals:
Cobalt
Nickel
Copper
Arsenic
Selenium
Bromine
Strontium
Zirconium
Silver
Cadmium
Tin
Antimony
Gold
Mercury
Bismuth
Palladium
Polonium
Radium
One common application would be to test jewelry for gold, silver or zirconium. 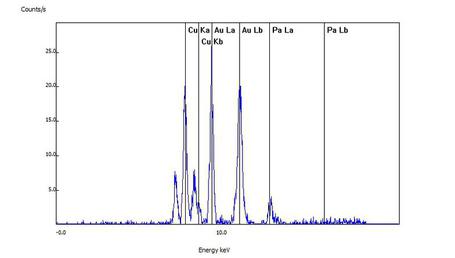 For this sample, the customer's wedding ring was confirmed to be white gold as the spectral lines of gold (Au), copper (Cu) and palladium (Pa) can readily be seen 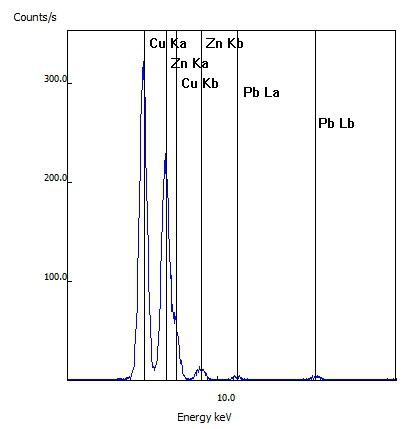 For this sample, the customer's item was confirmed to be real brass as the spectral lines of copper (Cu) and zinc (Zn) were seen as well as lesser amounts of lead (Pb) 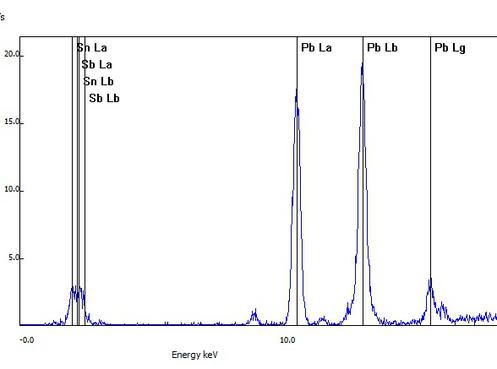 This sample of a collectible figurine was determined to be a low grade of pewter based on lead being the primary metal detected. Spectral lines of common pewter metals antimony (Sb) and tin (Sn) are seen.
The most common item to test for heavy metals is old dishware 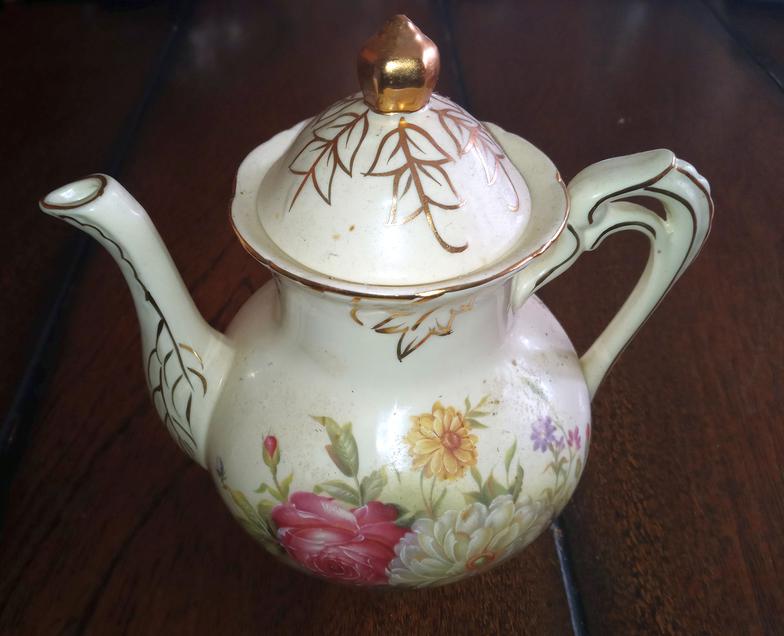 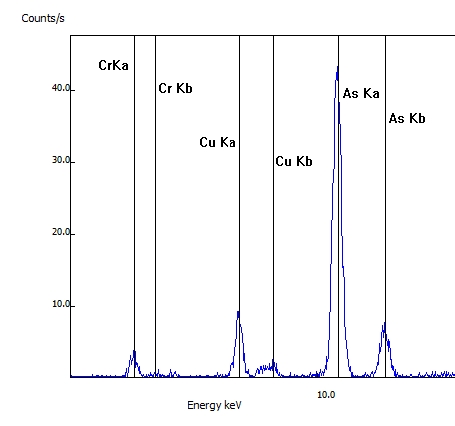 Another common application of XRF testing is for arsenic-contaminated wood preservatives (CCA). In this wood sample, the arsenic as well the associated chromium (Cr) and  copper (Cu) was detected. CCA was banned in 2003. 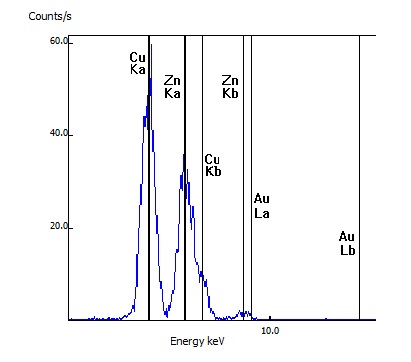 This customer's rosary was tested after it reportedly changed from its original silver to a gold color. While the rosary link tested did have a gold appearance, the testing indicated the metal was primarily copper (Cu) and zinc (Zn) and no gold (Au) was detected.
How Does Non-Destructive Metals Testing Work?
X-ray fluorescence (XRF) is a mature technology, being used predominantly in the environmental field for the testing for lead in paint and occasionally for a soil or for other environmental screening purposes. XRF works by penetrating the sample with X-rays from an X-ray tube or a radioactive source and then measuring the energies released by the excited electrons. Its usefulness is based on the characteristic excitation patterns that are (almost) unique to each element, allowing a single instrument to detect approximately 75 elements, including most if not all of the Priority Pollutant heavy metals. The range of detection may vary some based on the type of XRF but generally extends in the Periodic Table from chlorine (Atomic No. 17) through uranium (Atomic No. 92). XRF instruments are typically configured as “point and shoot,” delivering the user with a calculated concentration of the tested sample in a few seconds to perhaps a minute at most. However, the XRFs also allow the user to observe the spectra of each sample, whether or not it is calibrated for that element.
Sensitivity to Heavy Metals Detection
XRF testing is generally more sensitive for the dense/heavier metals as shown in the figure below. However, testing is generally more accurate for intermediate weight metals Arsenic (Atomic Weight 33) through Cesium (Atomic Weight 55) because both the K and L spectra lines can be seen. 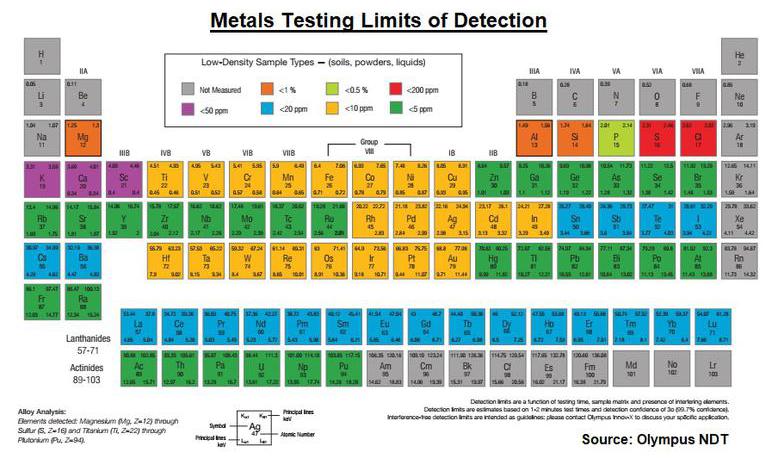